Sometimes different ingredients come together to make something so much greater than the sum of its parts, with a combination so natural that you forget the ingredients were ever separate in the first place. Think chocolate and peanut butter, but in this case, with a deep scientific impact that has the potential to deliver improved cell therapies for cancer patients. That’s the case for ArsenalBio, a company whose scientific founders – members of the PICI network – began with their own ideas on how to overcome the challenges of treating solid tumors. But as they began to work together, they realized they each brought something to the table that could solve a different part of the equation. In addition to investing in the company, PICI also helped the founders refine the vision of what Arsenal could be.

“PICI has created an environment where our member investigators trust that not only can they come to the table with their best ideas, but when they do, we’ll be there to support them,” said John Connolly, PhD, PICI’s Chief Scientific Officer. “Whether that means helping hone their ideas, supporting them as they tackle the logistics of new company creation, or connecting them with each other to fill in missing pieces, we have the expertise to help them get off the ground.”

Below is a conversation with three of the scientific founders: E. John Wherry, PhD, the Barbara and Richard Schiffrin President’s Distinguished Professor and Chair of the Department of Systems Pharmacology and Translational Therapeutics in the Perelman School of Medicine at the University of Pennsylvania (Penn) and Director of the Penn Institute for Immunology, Alexander Marson, MD, PhD, a professor of Medicine at the University of California San Francisco (UCSF) and founding Director of the Gladstone-UCSF Institute of Genomic Immunology, and Kole Roybal, PhD, an associate professor of Microbiology and Immunology at UCSF. Answers have been edited for length and clarity.

Q: How did the idea for Arsenal come about?

Wherry: There’s an old Reese’s Peanut Butter Cup commercial with a guy walking down the hall with a bar of chocolate and someone else walking down the hall with peanut butter. This, to me, is the essence of what happened. We realized exhausted T cells would be a big part of immunotherapy responses, not just with checkpoint blockade, but also with cellular therapy. My lab had been working on the internal wiring of exhausted T cells for many years, so we knew this would be valuable for engineering these cells to do things they weren’t doing already.

Marson: I was developing the technologies for CRISPR manipulation of T cells. And by 2017 and 2018 when we started to talk about this company, we had a precise CRISPR tool that we thought could help us overcome some of the factors that had limited cell therapies in the past.

I remember sitting in Sean Parker’s living room and talking to him about my idea, and I was really blown away by his engagement. We hardly knew each other, but he was knowledgeable and enthusiastic about the science. We discussed how the technology could be the basis for a company, but there were pieces missing. We had the tools to start manufacturing these cells, but John brought the deep biology and the understanding of what we wanted to aim for and what we wanted to avoid when making these cells.

Wherry: I’d been talking to Sean for about a year. Then at a PICI retreat in 2018, he mentioned he’d also been talking to Alex. From there, it was a matter of a conversation over breakfast. I had a bar of chocolate. Alex had the peanut butter.

Marson: With John, we looped in Nick Haining (a bone marrow transplant physician and cancer immunologist and a leading biologist in T cell exhaustion), Brad Bernstein (a world expert in cancer epigenetics and computational analysis of cell state) and Theo Roth (a remarkably talented UCSF MD/PhD student who helped pioneer CRISPR reprogramming of T cell function). Even with that combination, we still knew we needed more. We could make the cells, and we knew the cell states we wanted to manufacture. But we realized quickly that there was an opportunity to figure out how we could engineer the cells more precisely based on what cells actually respond to, how they recognize cancer, and how they jump into action once they find cancer in the body. It was immediately clear to all of us that Kole was the world leader in this, so we expanded the company, and the band was complete.

Roybal: My lab spearheaded the efforts on building new technologies to precisely recognize tumors, which prevents toxicity and lets us program the cells to have very specific therapeutic functions. The biggest thing I worried about was that we were trying to leverage too many things at once, so it’s been exciting to see the amazing team we’ve assembled work together to make this a reality.

Q: What is the main problem Arsenal is trying to solve, and how does your approach differ from others in the field?

Marson: CAR T-cells have been remarkable for certain types of cancer, but they still don’t work for most patients. So the real impetus is: can we use a suite of technologies to precisely program the DNA inside of CAR T-cells to make them more effective at treating cancers that are not responding to currently available immunotherapies.

Roybal: Our approach is solving for multiple layers. How do we manufacture cells, which is what Alex is pioneering, and then how do we build that out so it’s efficient and cost-effective? On top of that, how do we make these cells target cancer very specifically so that we can reduce the potential toxicity for patients? Once the cells are in the tumor microenvironment, they need to be able to turn on certain therapeutic programs that can attack the tumor but also change the microenvironment itself so that cells within the tumor can help in the immune response.

Wherry: Alex and Kole both crystalized it. We are trying to get the most effective on-target T-cells that are the most resilient. And we have multiple technological and scientific modules to try to achieve those two goals.

Roybal: We can even go beyond what the T cell naturally does. So hopefully, over the course of building products with Arsenal, we can manipulate natural T-cell function but also take T cells into a new product realm.

Wherry: That’s why having Kole here is so critical. Alex and I have thought within the confines of this space for a long time, but having someone who thinks about how to create new functionality that doesn’t exist in nature really pushes the envelope of what’s possible.

Q: How did PICI enable you all to work together to bring this idea to fruition?

Marson: PICI has been instrumental in this. These conversations were happening at PICI retreats. The structure of the retreats and the way we’ve gotten to know each other created the scientific exchange, but it also enabled the relationships and the trust to do something bold like this. Jeff Bluestone and Sean helped steer us together to create the company. This company started in a much better position because of Sean’s vision.

Wherry: One of the most valuable things about PICI is that we had a lot of freedom to operate with PICI funding from the beginning. We had the ability to take risks and to build platforms and invest in science that was essential to build what is now the backbone of Arsenal.

Roybal: I’m thinking about all the technology we have been able to port into Arsenal, which is a basis for certain aspects of products we’re building. If I’d tried to start a company on my own, I wouldn’t have had the right set of tools, and the time it takes to scale up and bring a therapy to patients would have been much longer. What Sean and PICI have done allows for more rapid discovery and the right connections to make something out of the ideas.

Wherry: The sense of culture PICI has created allowed us to feel comfortable enough to transfer our ideas, our attachment to certain things that are important, to see the goal that we are all part of. I don’t think you get that from casual collaboration. You get that from someone you’ve been around for a while and who shares the same goals and vision for how science should be done. This wouldn’t have happened without that culture built as the backdrop for Arsenal.

Roybal: As we move toward clinical trials, PICI’s network and translational and informatics capabilities are going to come into play for us.

With the scientific founders in place, the company needed a CEO. Ken Drazan, MD, took on the role in 2019, and immediately recognized the opportunity the founders had created by bringing their ideas together in one platform. A former transplant surgeon, the idea of coordinating so many varied stakeholders appealed to him.

“The result is something different than each of the founders originally intended, but more complete and well-equipped to produce a best-in-class therapy than any of them could have developed without the others,” Drazan said.

Q: How has the company’s leadership created a culture for growth and success?

Roybal: All of the complex technologies and ideas that we’ve brought into this company, Ken has gone to the ends of the earth to build teams that can improve and integrate the pieces and develop them for the clinic in a short amount of time, which has been incredible.

Marson: The technologies are the opportunity. The challenge was that this could have been a lot of disparate pieces coming together. Ken has really had a vision for putting the pieces together to make the most of it.

Wherry: There is something intangible about the collection of people involved. There’s something more than each of the founders individually, and that extends to Ken. He has brought an energy and an appetite that I’ve not seen from any other CEO for a company this size to do all parts of the process at an incredibly high level.

Q: What’s next for Arsenal?

Roybal: Everything that has come together has led to us developing therapies for patients. We are seeing the pieces working together. We are seeing the teams and the pipeline to manufacture cells being built. It’s incredibly exciting to see in such a short amount of time.

Marson: I’m excited about the combination of those two things. We have a very specific product coming together that is likely to go into humans in the foreseeable future and has great promise. I’m even more excited when that’s coupled with the ongoing engine we have developed to keep discovering and making things better and more applicable to even more patients.

Wherry: The opportunity to create a new drug in an entirely new context of medicine is super exciting. CAR T-cells and cellular therapies have been around, but there are aspects of this that are very uncharted territory. And if and when we’re successful, the sky is the limit. What I’m most excited about is to treat patients and have impact, and also to see if we really can transform the field. This is a really hard thing to do, but I think of all of the companies out there, Arsenal has as good a chance as any of creating a whole new paradigm.

Keep up to date with the latest PICI news by signing up to receive email updates. 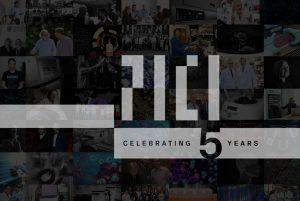