At one time, biologists considered the tiny, bubble-shaped blobs called exosomes the garbage trucks of the cell: They shuttled unwanted refuse from inside to outside, dumping their contents at will.

But around 2007, scientists found that these unassuming globules in fact carry proteins or genetic code to specific organs or tissues. A garbage truck no longer, the exosome morphed into UPS, a fleet delivering important messages and packages.

Now, scientists at the University of Pennsylvania say they have discovered another major function of exosomes: they can exert control over the immune system during cancer.

In research published Aug. 16 in the journal Nature, in part funded by the Parker Institute for Cancer Immunotherapy, the authors show definitively for the first time that cancer cell exosomes carrying PD-L1 can suppress T-cells in the immune system throughout the body.

“This research changes our whole concept of how the immune system and T-cells are regulated in cancer and the role that exosomes play,” said Cheryl Selinsky, PhD, vice president of research operations at the Parker Institute.

Prevailing wisdom says that tumors can only suppress T-cells in close proximity.

“It’s like hand-to-hand combat,” said Alexander Huang, MD, a co-author on the paper and a Parker Institute Bridge Scholar at the University of Pennsylvania.

On cancer cells, PD-L1 sits on the surface of the cell. T-cells have a protein called PD-1 on their surface. When the cells come in contact and the two proteins lock horns, the T-cells become sapped of energy and can no longer effectively fight off tumors or infections.

This research, the authors say, shows a totally different mechanism for tumor suppression that requires no contact at all. Lead investigator Wei Guo, PhD, of the University of Pennsylvania describes it in terms of air warfare.

In this scenario, the fleet of delivery trucks transforms into an army of “drones.” From the home base of the tumor, they fly through the bloodstream bearing a weapon called PD-L1, thwarting T-cells along the way.

“These little exosomes are very, very small, but seem to be very suppressive,” Huang said. “They can fight T-cells from a distance, throughout the body.”

Shining a light on a “dark space” in cancer immunology

E. John Wherry, PhD, Parker Institute co-director at the University of Pennsylvania, said the work sheds light on what he called the “dark space” of immune system regulation.

“Much of the field has focused solely on cell-to-cell interactions, and these non-cell components like exosomes have been ignored,” Wherry said.

The work also helps solve a mystery about cancer immunotherapy and why it worked in some cases when it seemed it should not.

However, some patients with low levels of PD-L1 on their tumors have been found to respond robustly to anti-PD-1 or anti-PD-L1 therapy. This conundrum has perplexed researchers across the field for several years.

With this paper, the University of Pennsylvania researchers helped solve the riddle: PD-L1 can exist in the bloodstream on exosomes as well as on tumors. This new information points to a therapeutic role for PD-L1 checkpoint inhibitors, currently being tested in clinical trials, and offers a bubble of hope for patients whose tumors do not express PD-L1 on the cell surface.

“It could be that tumors with low PD-L1 can still be treated with a drug that targets the anti-PD-1/PD-L1 pathway,” Wherry said, though there would still have to be a cell expressing PD-L1 making the exosomes.

Exosomes as a biomarker

But how can you tell if the drugs will work for a patient? This question of finding a predictive biomarker for checkpoint inhibitor response remains a significant quest in immunotherapy.

Currently, only 20 to 30 percent of cancer patients respond to anti-PD-1 checkpoint treatments, which can be expensive and cause side effects. Predicting which patients will respond can put them on a path to more successful treatment. On the flipside, a biomarker could also determine who would not benefit from the drugs, conserving resources and avoiding unnecessary treatment for those who are not good candidates.

As part of the study, scientists measured the amount of PD-L1 on exosomes circulating in the blood. They found it varied depending on the state of the patient’s immune system, suggesting that PD-L1 could in fact serve as a biomarker to predict whether a patient would respond to anti-PD-L1 or anti-PD-1 immunotherapy treatments.

“Right now, we have no absolute way of knowing if anti-PD-1 checkpoint inhibitors will work for a patient with cancer. It’s a guessing game. But if what this paper shows is correct, then it would be theoretically possible to use a simple PD-L1 blood test as a guide for deciding whether the drug would work for a patient.”

“You could take blood pre-treatment and at six weeks, look at the exosomal PD-L1 levels to decide whether to change therapies,” Huang said.

Compared to biopsy or other methods, a blood test would be a relatively easy test that would help patients and doctors make treatment decisions.

If the experiments can be replicated in a larger study, that would be a significant advance for the field, said Selinsky.

“Right now, we have no absolute way of knowing if anti-PD-1 checkpoint inhibitors will work for a patient with cancer. It’s a guessing game,” Selinsky said. “But if what this paper shows is correct, then it would be theoretically possible to use a simple PD-L1 blood test as a guide for deciding whether the drug would work for a patient. We could also potentially monitor response over time using this method, which would be much less invasive than a biopsy.” 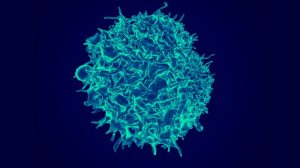